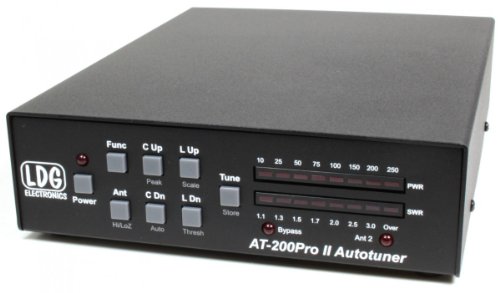 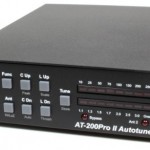 Time was, 100 watts was a lot of power. Today, more and more transceivers feature 200 watts output. Even though many of these modern radios feature a built-in tuner, it’s range and features are usually quite limited; if you need a tuner, you probably need a better one than they built into the radio. The LDG AT-200ProII is designed for this new generation of rig. It’s specifically recommended for Ten-Tec and tube radios. Many QRP operators have a small 100-150 watt amplifier for times when you need a few more S-units. The AT-200II is ideal for this kind of operation; it’s minimum required power is only 5 watts, but it will handle the higher power as well. The AT-200II will handle up to 250 watts SSB or CW on 1.8 – 30 MHz, and 100 watts on 54 MHz. It features LDG’s state-of-the-art, processor-controlled Switched-L tuner. It will match virtually any kind of coax-fed antenna, including Yagis, dipoles, inverted Vs, slopers, loops, just about anything. It will typically match a 10:1 SWR down to 1.5:1 in just a few seconds. You can also use the AT-200ProII with longwires, random wires and antennas fed with ladder line with the optional LDG balun. Operation couldn’t be simpler: while transmitting a carrier, just press the Tune button. An automatic tuning cycle will begin, then end a few seconds later with the tuner set at the lowest SWR (almost instant for frequencies stored in memory). The AT-200ProII is the latest in a long line of innovative LDG tuners. Get the most out of your Kenwood, Yaesu, Ten-Tec or Icom radios that operate at higher power.
5 to 250 watts SSB and CW. 100 watts on 6M. 75 watts with PSK or digital modes. – Easy to read LED bargraph display for RF power, SWR and status
LEDs for Antenna Position and Bypass – 4,000 memories (2000 for each antenna) for instantaneous band changing – Two position antenna switch with memories for four antennas on each position
Tuning time: 0.5 to 6 seconds full tune, < 0.1 second memory tune – Built in frequency counter for memory operation
Frequency coverage: 1.8 to 54.0 MHz. – Tunes 6 to 800 ohm loads (16 to 150 ohms on 6M), 6 to 3600 ohms with optional 4:1 Balun (LDG RBA 4-1) – For Dipoles, Verticals, Vees, Beams or and Coax Fed Antenna
Includes 6' DC power cable – Enclosure: 9.5D x 7.1W x 2.0H inches – Weight: 2 pounds